The Karori man has made a career out of creating mindbending puzzles, writes Bess Manson. 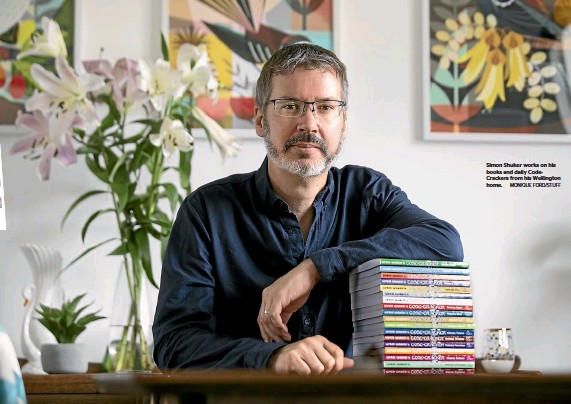 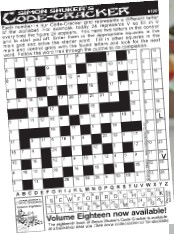 Somewhere in Malta there’s someone tearing their hair out over Simon Shuker’s Code-Cracker. In Bangladesh there’s a keen puzzler puzzling over that almost clue-less word game. In amodest two-storey home in a Karori cul-de-sac, Shuker is making sure his 13 x 13 word puzzle is just hard enough for word fiends to want to tackle it but easy enough for them to stick around and work it out. Puzzles are good for us, he says. Knocking out a Code-Cracker, solving a puzzle – it brings satisfaction, pumps dopamine into us as our brains expect a reward for getting all those letters in the right places. ‘‘There’s that moment of satisfaction when your brain puts together disparate clues and comes upwith an insight that turns out to be correct,’’ he says. Shuker, a 49-year-old boffin with a big brain and a galloping mind, has written about 8000 Code-Crackers for New Zealand newspapers, including the Manawatu¯ Standard, and more than a dozen other daily papers around the globe. He’s sold more than 150,000 Code-Cracker books over the last 18 years. Puzzles are in. He nuts them out at his Wellington home office – a nerve centre of humming computers and monitors. A puzzle dictionary tome is well thumbed. He churns them out whilewatching TV or listening to music. Producing them involves amother-andson double act with Deborah Shuker, who lives a few streets up, checking her son’s work. Every puzzle goes past her. She checks for accuracy, words he may have used too recently, unintentional rude word combinations (eeek). Deborah Shuker did the same for Simon’s father Alan, who started the family puzzle empire. Simon Shuker was a chip off the old block. He and his two sisters grew up in awordy family and were often taskedwith helping their dad in the puzzle biz. They were all voracious readers. They played Scrabble, word games, mastered puzzles together. Alan Shuker had started out at IBM in the 1970s, but a shirt and tie job wasn’t for him, and he turned to landscaping and gardening work. Then he went on to become an entrepreneur creating his own products – from his own Granny’s Black Stove Polish and a chimney cleaning powder, to Kiwi silver fern badge trinkets. He roped in his kids – Simon, Christine and Karen – to help from their Paeka¯ka¯riki home, with the kids literally forming a production line to bottle and package the products. But the real Shuker family business was yet to come. Alan, used to doing crosswords on the train, decided Aotearoa should have its own crossword with a New Zealand bent, rather than the English-centric ones being published in our newspapers. Kiwis might have a better idea where the Rangitata River is than Hampshire’s River Itchen. During the hot New Zealand summers, the kids took turns joining Alan on his trips, heading off in the family’s brown Toyota around a preplanned route of daily rags. ‘‘By the end of the trip the car tapes of Split Enz’s Time and Tide and Blondie’s Autoamerican had been played many times, and all the lyrics memorised,’’ Shuker recalls. They were memorable trips; father and son, talking crosswords – three-across, fourdown. It sometimes took a few years of knocking on doors before editors signed up, but eventually Shuker crosswords and puzzles were being published all over the country. Alanwouldmake the crosswords and Deborah would solve them and check for errors. Simon and his sisters would help their father, making word searches, checking puzzles, being his wordy guinea pigs. Alan and Deborah Shuker sold the crossword and puzzle company to Doug Hendry in the mid-2000s, by which time his puzzles, and Simon’s Code-Crackers, were appearing in most newspapers in New Zealand and many others around the world – from the Times of Malta to the Cape Times in South Africa, The Daily Nation in Kenya to the Dhaka Tribune in Bangladesh. Simon Shuker had written The Listener’s Take5 puzzle, Code-Cracker’s smaller sibling, which had come out of a few different puzzle ideas he and his dad workshopped in 1993. A year later he produced the first CodeCracker which eventually grew to its current 13 x 13 puzzle using all the letters of the alphabet. He’s up against companies producing computer-generated puzzles, but Shuker reckons there’s nothing like the individually created code crackers. They need to be the right grade of difficulty – not too easy, not too hard. Above all they need to be error-free. Editors hate being called by hundreds of readers about amistake, he says. Shuker’s Code-Crackers were always a side hustle while he studied (literature, linguistics, physics) and worked as an electronic engineer. When he became a full-time stay-at-home dad to now 14-year-old Joseph whilewife Ruth went back to teaching maths, he went full-time code cracking. When he’s not creating these mindbending puzzles he’s making stuff. There’s no end to puzzle making, he says. Sometimes he likes to do things where he can see an end to a project. He’s handy with wood. He’s just finished revamping grandma’s dining room table. He likes techie stuff. The parlour-sized Spaciesmachine gets a good workout. He likes cars, he says, pointing to the pimped-up van on his driveway. A few paintings by his own hand hang on the walls. But words and numbers are never far from his mind. There’s always another 13 x 13 puzzle on the go for the insatiable appetite of the codecracking fraternity.