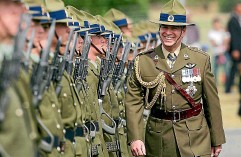 Prince Andrew, the Duke of York, has been stripped of his title of Colonel-in-Chief of the Royal New Zealand Army Logistic Regiment, part of the broader fallout from sexual assault allegations against him. He will also no longer use the title ‘‘His Royal Highness’’. Buckingham Palace announced yesterday ‘‘with the Queen’s approval and agreement’’ that all of Prince Andrew’s military affiliations and remaining royal patronages had been returned. Queen Elizabeth’s second son, who is 61, is facing a United States civil lawsuit that accuses him of having sex with a teenager trafficked by disgraced financier Jeffrey Epstein. In New Zealand, the Duke of York was the Colonel-in-Chief of the Royal New Zealand Army Logistic Regiment (the Duke of York’s Own), Prime Minister Jacinda Ardern’s office said yesterday. As a result of patronages returning to the Queen, his appointment has now ended, it said. ‘‘Any further changes to royal patronages and appointments would be amatter for the prime minister to raise with the Queen of New Zealand in due course,’’ it said. The New Zealand logistic regiment mechanical maintenance on equipment. Colonel-in-Chief is a ceremonial position, which has no operational purpose. The holder has no right to issue orders. The palace’smove comes as longsimmering sexual assault allegations against Prince Andrew take a new turn. Unconvinced by the argument from his lawyers, a US district judge ruled the case against the prince could go ahead. Virginia Giuffre, 38, has alleged she was the victim of trafficking by Epstein – who killed himself in 2019 while awaiting trial on sex-abuse charges – and his girlfriend, Ghislaine Maxwell. Giuffre is suing the prince, claiming he abused her in 2001, when she was 17. Maxwell was convicted in December of luring teenage girls as young as 14 to be sexually abused by Epstein. She denied the allegations made by several women. Andrew, who denies the lawsuit allegations and maintains he cannot recall meeting Giuffre, has been mostly out of the public eye for the past year, and many organisations distanced themselves from him after he defended his relationship with Epstein in a disastrous 2019 BBC interview. But until now, he had retained his honorary military titles with multiple British regiments. The statement from Buckingham Palace said: ‘‘The Duke of York will continue not to undertake any public duties and is defending this case as a private citizen.’’