Forecaster’s tips at odds with surge to fixmortgage rates 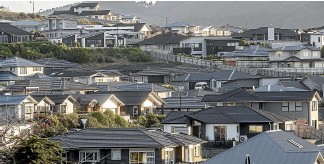 An economic downturn and falling house prices will persuade the Reserve Bank to stop its cycle of interest rate rises much earlier than expected in August, research firm Capital Economics forecasts. Its prediction that rates rises would then go into reverse next year breaks ranks with the bank’s own assumption that the official cash rate will continue to track higher to reach 2.5 per cent by mid-next year and remain there until at least the end of 2024. Capital Economics said the market was pricing in an OCR of 2.75 per cent by the end of next year. But its Singapore-based economist for New Zealand and Australia, Ben Udy, said it instead saw the OCR hiking-cycle coming to a halt in August this year with the rate peaking at 2 per cent, before cuts kicked in next year. ‘‘We’ve pencilled in two 25 basis point rate cuts in the second half of 2023, from 2 per cent to 1.5 per cent. ‘‘But if the bank lifts rates more aggressively than we anticipate, more cuts will be needed.’’ The research firm’s forecast would suggest that some homeowners might be premature in rushing now to lock in longer-term fixed mortgage rates. ASB has said fears of interest rate hikes have fuelled a surge in homeloan borrowers opting for fixed rates of three to five years. ANZ’s economists have suggested a one-year rate could prove the best option, as mortgage rate rises from here were likely to be more moderate. Capital Economics’ forecast is based on an assessment that house prices will soon stop rising and will then fall by about 10 per cent between the middle of this year and the middle of 2023. Udy said it believed a decline in house prices would kick in at the same time as inflation began easing and unemployment started rising, leading the Reserve Bank to reassess its OCR track. A housing market downturn would weigh on the economy in a number of ways, Capital Economics said, slowing house-building and also prompting households to cut back consumption at a time when real wages were also falling and savings levels were ‘‘around their lowest rate since the GFC’’. Much of the near-term focus among economists is expected to be on the potential for Omicron supply chain disruptions and the December quarter inflation figures due out on January 27, which will come in the wake of US inflation climbing on Thursday to a near 40-year high of 7 per cent. That has firmed up expectations of a series of interest rate hikes in the US. But Capital Economics expected New Zealand inflation would drop back dramatically from 4.9 per cent to 1.7 per cent by mid-2023 as the price of petrol fell and construction costs and goods shortages eased. Despite its more sickly forecasts for the economy, Capital Economics is not expecting a dramatic surge in unemployment, instead predicting a moderate upswing to 4.5 per cent by the end of next year. Its forecast interest-rate cuts in 2023 would ‘‘come as a surprise for markets’’, it reported. ‘‘That’s why we expect the New Zealand dollar to weaken from US$0.68 to US$0.62 in the years ahead.’’