France must ‘‘step up’’ and stop migrants crossing the Channel, Boris Johnson demanded yesterday, after at least 31 people died off the coast of Calais trying to reach Britain. The bodies of dozens of migrants including five women and a young girl were found floating in the sea after their flimsy boat, likened to a ‘‘blow-up paddling pool in a garden’’, capsized and sank 10km off the coast of Calais in rough seas and cold weather. Rescuers were still searching yesterday for missing migrants as authorities warned the death toll was likely to rise. Gerald Darmanin, the French interior minister, told an impromptu press conference in Calais that only two migrants had been saved from the boat, which is feared to have been carrying more than 40 people. The tragedy happened on another day of chaotic scenes in the Channel, with dozens of boats crossing as migrants rushed to make the dangerous journey ahead of winter storms which are expected to sweep in this weekend. Boris Johnson convened an emergency Cobra meeting yesterday amid anger among senior government figures over the lack of French action in recent weeks, despite repeated warnings over the potential loss of life. After chairing the meeting on the accident, Johnson said the deaths were ‘‘appalling’’ and ‘‘underscored how dangerous’’ it was to cross the Channel, but also showed the efforts to halt the record surge of migrants crossing the Channel ‘‘haven’t been enough’’. Johnson spoke with French president Emmanuel Macron and they agreed the need for joint action, and that it was ‘‘vital to keep all options on the table to stop these lethal crossings and break the business model of the criminal gangs behind them’’. The prime minister said the Government, which is providing £54 million (NZ$104M) to the French for extra police, would increase its support, suggesting he backed joint patrols on France’s beaches to intercept migrants before they set sail. ‘‘Our offer is to increase our support but also to work together with our partners on the beaches concerned, on the launching grounds for these boats. That’s something I hope will be acceptable now in view of what has happened,’’ he said. ‘‘We have had difficulties persuading some of our partners, particularly the French, to do things in a way that the situation deserves. I understand the difficulties that countries face but we want to do more together.’’ Macron said France would not allow the Channel to become a ‘‘cemetery’’ as he called on his EU counterparts to strengthen resources for the European Frontex border force to stop migrants entering the bloc. Calling for an emergency meeting of European ministers, he said: ‘‘It is Europe at its deepest level – humanism, respect for the dignity of each person, that is in mourning following the death of 31 migrants off the coast of Calais.’’ Priti Patel, the UK Home Secretary, revealed this week that she was in talks with the French for joint sea patrols to intercept the boats but that the French had rejected UK offers of Border Force and police officers being deployed to France’s beaches. – Telegraph Group 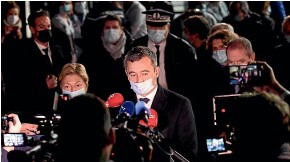