The crash that killed a well-known kayaker involved four vehicles and looked like a ‘‘war zone’’, according to a witness. A 24-year-old Marlborough woman appeared in Nelson District Court yesterday in relation to her part in the death of kayaker Andrew Martin in a car crash on State Highway 6 last year. Members of Martin’s family filled the courtroom including his ex-wife, mother, and two daughters, one of whom was badly injured in the crash. Four other family members attended the hearing through video chat. The mother of the woman charged was also in court. The 24-year-old was found guilty of charges of aggravated driving causing death, and four charges of aggravated driving causing injury. The hearing was held before a judge alone. Rob Harrison said his client did not dispute the facts, and acknowledged she was driving carelessly. He said she disputed the aggravated substance of the charge. Crown prosecutor Jackson Webber read the statements of several witnesses involved in the crash, which took place around 4pm on September 27 last year. Witness Maureen Burrow was driving back with her husband, Lindsay Burrow, to Blenheim from crash. The Burrows had followed the 24-year-old in her white Kia on State Highway 6 from Nelson. Burrow said she did not notice anything about her driving before the Whangamoa Saddle, although she mentioned to her husband the driver seemed inexperienced. However, when they reached the Whangamoa Saddle, the driver started driving poorly, going into corners fast and braking suddenly. It was at the top of the Whangamoa Saddle when the driver ‘‘lost the plot,’’ Burrow said in her statement, with the vehicle veering to either side of the lane and drifting over the yellow line. After turning a corner, Burrow said she saw a line of cars driving towards Nelson in the opposite lane. She said the white car hit the third car in the line after crossing the centre line, and saw parts of the car buckle. Then, Burrow heard a loud ‘‘bang.’’ After this her vision went grey. The next thing she could remember was her husband asking if she was all right. The scene of the accident was a ‘‘total mess and a war zone,’’ Burrow said. Senior Constable Simon Burberry said the crash scene was filled with chaos and confusion. Four cars were involved. It began with the initial impact of the white Kia heading towards Blenheim hitting the red Hyundai in the opposite lane. The red Hyundai then slid away and hit a red Mitsubishi in the opposite lane. The white Kia then had a second impact with a black Honda SUV which was following the red Hyundai, that sent the white Kia into a ditch, and the black Honda into a clay bank. Burberry’s assessment of the actual damage to the vehicles had indicated an angled approach by the 24-year-old’s vehicle, which only could have been made by continuing to steer into the righthand curve instead of straightening out of the turn. Such steering was often seen in new drivers who were trying to follow the centre line throughout the curve in the road, Burberry said. Judge Garry Barkle said it would be remiss of the court not to recognise the devastating impact of the crash, with Andrew Martin losing his life, his daughter Lucy suffering significant injury, and the Burrows both being injured. He extended sympathy to everyone affected by the events. Judge Barkle said he was satisfied the driver had met the standard of aggravated careless driving in the charges. He found the 24-year-old guilty of all five charges. 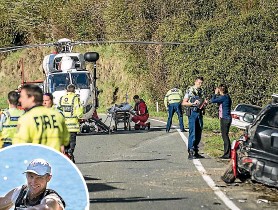