1. Eve Polastri was the title character in which popular BBC thriller series? 2. What Christchurch building and tourist attraction was designed by Japanese architect Shigeru Ban? 3. What does the ‘‘S’’ stand for in the initials of government agency the GCSB? 4. What two-word French term for a bite-sized appetiser literally translates as ‘‘mouth amuser’’? 5. What 1980s rock band from Dunedin took its name from a French poet? 6. What do the science-fiction movies Blade Runner, Total Recall and Minority Report have in common? 7. Which country gained independence first: Fiji, Samoa or Papua-New Guinea? 8. What North Island coastal resort town was named after the British commander in the 19th century Crimean War? 9. What word is derived from the name of a Moroccan city and can mean a variety of citrus fruit or an orange-yellow colour? 10. Which New Plymouth park is the venue for an annual festival of lights? 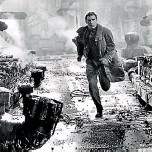