Islanders torch their Parliament in fury at ties with Beijing

Police have fired tear gas and water cannon at hundreds of demonstrators in the Solomon Islands who torched parts of the Parliament and attacked Chineseowned shops in protest against strengthening ties with Beijing. Residents of the tiny Pacific state fled as more than 1000 protesters, most from the large pro-Taiwanese Malaita province, descended on the capital, Honiara, demanding the resignation of Manasseh Sogavare, the pro-Beijing prime minister. Schools and businesses closed and a curfew was imposed in the capital, where 84,000 people live. ‘‘A lot of Honiara residents were caught by surprise with what has happened,’’ Georgina Kekea, a journalist on the islands, told Radio New Zealand. ‘‘It has really disrupted operations . . . and now people are not feeling safe anymore.’’ Kekea said it was likely that ‘‘the worst is yet to come’’, with more expected to join the protests. Videos on social media showed buildings on fire and police firing tear gas at looters. Smoke and flames were seen rising from the Parliament grounds. In 2019 the government ended 36 years of diplomatic ties with Taiwan after China offered large financial inducements to the islands, including construction of a national stadium in Honiara. China has since built a large embassy in the centre of the capital. However, many in Malaita, the Solomons’ largest province, including Daniel Suidani, the province’s premier, who claims that he rejected bribes to support cutting ties with Taiwan, remain opposed to closer ties with China. Suidani has maintained ties with Taiwan, which has been providing aid to the province during the coronavirus pandemic, angering both the country’s government and Beijing. The Solomon Islands Herald reported that protesters looted and damaged shops in Honiara’s Chinatown, and marched to the Chinese embassy. Video showed some in the crowd throwing rocks at the embassy. A police station and another building, owned by a Chinese citizen, were also burnt down during the protests. Suidani, who did not attend Wednesday’s protests, said the damage was the result of the government not listening to the people on a range of issues over China and Taiwan. Police in riot gear used tear gas and rubber bullets against protesters. They stopped some arson attempts in Chinatown, but some shops were looted. Radio New Zealand, reporting from Honiara, said Wednesday’s protest was reminiscent of civil unrest in 2006 when rioters rampaged through Chinatown, burning most of it down in anger over the rising level of Chinese ownership of Solomons businesses. 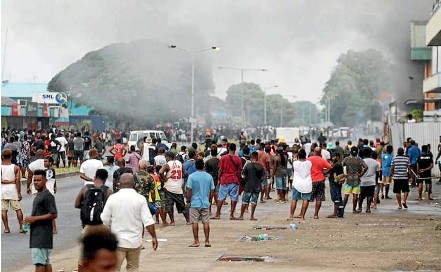