Author of her own demise

New Zealand authors often claim they don’t get enough attention from the media. If a rugby team wins a game, we all hear about it. If a writer wins an important prize, it’s often buried or ignored. But that all changed this week when we witnessed what must be New Zealand’s first political coup inspired by a book signing. A tumultuous 24 hours in politics began at lunchtime on Wednesday when former National leader Simon Bridges signed copies of his book, National Identity, at a bookstore in Wellington’s Lambton Quay. A queue of expectant Bridges fans snaked down the street. As news reports showed, Bridges was in a buoyant mood. It created an impression of a politician who wasn’t doing a particularly good job of disguising that he wouldn’t mind being National leader again, and there was talk that he had the numbers to take over. Of course Bridges could not come out and say that a plot was imminent, just as he could not openly acknowledge that National Identity is exactly the kind of book a politician writes if he or she is seeking to be prime minister. Funnily enough, his colleague Judith Collins published the same kind of book a year earlier. Its title, Pull No Punches, confirmed her willingness to be seen as a tough leader in the tradition of Margaret Thatcher. That book appeared only 12 days before Collins got her wish and replaced Todd Muller as leader. When politicians write books they are either fashioning their public images, as Collins and Bridges did, and as Barack Obama did much more spectacularly, or they are reflecting on their political careers and settling as many scores as their publishers’ lawyers will allow. But there is another book that keeps entering the picture, and that is Nicky Hager’s Dirty Politics. It appeared seven years ago yet still manages to be relevant. Hager’s book uncovered the links between blogger Cameron Slater and the then National government led by John Key. A chapter on ‘‘the crusher and the attack dog’’ covered the close relationship between Collins and Slater. Collins’ assertions that, when attacked, one must always ‘‘reward with double’’, and ‘‘if you can’t be loved, then best to be feared’’, became unintentionally career-defining. It’s hard to avoid the sense that Collins has finally been undone by dirty politics. It was an image she never managed to shake off. Indeed, the events of Wednesday night seemed to confirm it. Without including her caucus, and claiming that she had unanimous support from the party board, which some have questioned, Collins demoted her rival and stripped him of all his portfolios. Bridges’ crime appeared to be a lewd comment made within earshot of National MPJacqui Dean five years earlier, for which he had long since apologised. Even those who accept that politics is a bruising game were surprised by a leader who seemed to have used an old, even irrelevant, grievance as political capital at an opportune moment. It looked like a stitch-up and due process was absent. Some of her colleagues recognised it for what it was, and her leadership was over by lunchtime on Thursday. Collins’ actions have been called kamikaze tactics, as though she was aware she was on the way out and resolved to take Bridges down with her. It was an ugly and self-destructive end to a short and unsuccessful stint as leader by a politician never short of ambition and self-belief, but who lacked judgment at important moments. 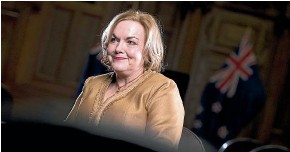