The most Collins Exit of all time

Judith Collins acted true to form when she blew up her own leadership this week. Sick to death of what she viewed as white-anting and undermining from those in the caucus who were trying to call time on her leadership, she dramatically sacked Simon Bridges from his portfolios over an alleged comment he made in front of Jacqui Dean five years ago. Unfortunately for her, it was dramatic overreach and the caucus promptly dispatched her out of the leadership. The comment made wasn’t great or appropriate – Bridges described it as indulging in ‘‘old wives tales’’ about the best sexual methods to conceive a daughter – but it was five years ago and should not have been elevated to a latenight sacking of the man who was positioning himself to take over from Collins. He and Dean have evidently sorted it – for the time being at least. While Collins maintains that she had to act and that Dean simply wanted someone to actually do something about the complaint, which had been festering for five years, it seems unlikely this course of action would have been taken if the perpetrator were anyone other than Bridges. Caucus colleagues were confused and dismayed at what they saw as a complete mishandling of the issue by Collins. And she is now gone. This was typical Collins: tactical rather than strategic. In an attempt to act decisively and also blast Bridges out, finishing his leadership ambitions – and career – in one fell swoop, she instead simply highlighted problems with her leadership that colleagues were already concerned about. Lack of judgment being prominent among them. In Collins’ defence, this is an issue on which she is consistent. She has long been of the view that the National Party has bullying misogynist elements and she is very big on workplace standards and professionalism. But, and it is an important but, many of her caucus colleagues feel that despite her running healthy offices herself, she has not shown loyalty or professionalism to any leader and very few colleagues. She also argued that she gave Bridges plenty of time to have a chat and sort out the situation, approaches, on her version of events, he refused. Bridges rejected that assertion yesterday. That wasn’t the only thing Collins said that has been rejected. In her fateful press release, Collins said the out-of-Parliament board backed her decision, but party president Peter Goodfellow emailed members yesterday afternoon making clear that was not the case. The loser in all of this is the National Party. There will be a significant amount of bad blood after today. Collins is unlikely to go quietly into the night and has already said she will contest the next election. The tragedy for National is that the party was quietly positioning itself to try to take advantage of what will be a very difficult second year in office for Labour next year. But instead of a leadership change that might have make a virtue of that, the new leader will now have to rebuild a house divided. That could mean generational change. While Bridges is the most experienced and delivered an impressive performance yesterday afternoon, he has earned the ire of many colleagues since he lost the leadership in May 2020. Collins, gambled, in effect, that in this current world of MeToo that being seen to do nothing about a complaint of this nature would be untenable for the National Party. That the party would have no choice but to back her, even if caucus colleagues thought the way she went about it was odious. But in the end, an off-colour comment from years ago, which only emerged when Collins’ leadership was under threat was viewed as just a bit too convenient, and the way she handled it, unacceptable. Collins never had the sort of deep support or basis of trust within caucus for the timing not to be viewed with cynicism and contempt by many of her colleagues. That leaves the big question: who is next? Bridges is likely to tip his hat in, and Christopher Luxon and Chris Bishop are understood to be weighing their options. Some MPs are talking generational change, other about the best chance at best competitive in the next election. But the current situation is fluid and there will be much water to under the bridge before Tuesday’s vote in caucus. The first question caucus members will have to answer is existential: what do they want the National Party to be? 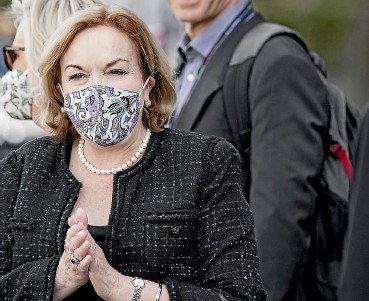