Wellington will trial fare-free or heavily discounted public transport on weekends next March. The one-month trial, which is likely to apply to all bus and train services in the region, will largely be to explore new fare structures. The trial was approved by Greater Wellington Regional Council at a transport committee meeting yesterday. Metlink general manager Scott Gallacher said the trial would help to prepare for the national integrated ticketing project, a new smartcard for payment for all public transport being developed by Waka Kotahi NZ Transport Agency. ‘‘We want to test the resilience of the network if we suddenly have public transport that’s free on weekends ... are the travel patterns much different to what we currently see and if they are different, what are those patterns?’’ he said. Metlink has already rolled out a number of new payment trials, including adding Snapper card payment to the Johnsonville rail line, and removing cash payments for some express bus services. Gallacher said one possibility under national integrated ticketing would be a weekly capped fare – where, for example, any weekly trips over a certain number would be free. ‘‘What we’ve seen in other jurisdictions, regular users of public transport hit the cap on Friday or Saturday which means any further travel is going to be free,’’ he said. Gallacher’s Metlink team will come back to the council in February with more details of the trial, which he said may be expanded in some way to test other changes as well. Both Greater Wellington and Wellington City Council have formally expressed support for the Aotearoa Collective for Public Transport Equity, which is calling for free public transport for students, under 25s and Community Services. Regional councillor Thomas Nash said he was hoping the Government’s Budget in 2022 would include a boost for public transport, including a change to the farebox recovery ratio (the portion of the Metlink network operating costs covered by fares versus rates and taxes). ‘‘This has got to be a partnership between central government and regional councils. Ideally, we would be moving towards less farebox recovery,’’ he said. ‘‘Most successful, equitable and high mode shifts systems around the world have less than in New Zealand.’’ He was also interested in trialling free fares on specific bus routes. The trial will be delivered under the National Ticketing Solution and jointly funded by the council and the transport agency. 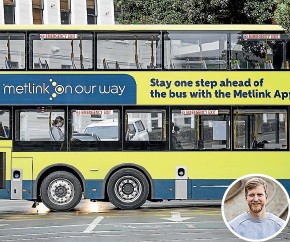