Three white men have been convicted of murdering Ahmaud Arbery, an unarmed black jogger who was shot dead while running through a residential neighbourhood in Georgia. Travis McMichael, 35, his father Greg McMichael, 65, and their neighbour William ‘‘Roddie’’ Bryan, 52, were found guilty after a jury deliberated for 11 hours. Arbery’s killing had become part of a larger national reckoning in the United States on racial injustice after graphic video of the shooting emerged following his death. Jurors asked to have mobile phone footage of Arbery, 25, being fatally shot played back three times before reaching their verdicts. ‘‘I never thought this day would come, but God is good. [My son] will rest in peace,’’ said Arbery’s mother, Wanda Cooper-Jones, outside the courthouse, where crowds cheered the decision. The jury for the two-week trial consisted of 11 white jurors and only one black juror, and there had been concerns that an acquittal could lead to violent, racially-charged protests. During the trial, prosecutors argued that the defendants chased Arbery because he was black, then provoked a confrontation with him and killed him. Defence lawyers claimed the three white men were acting in self-defence. US civil rights leader the Rev Al Sharpton said outside court: ‘‘Let today prove that all whites are not racist. And all blacks are not worthless. ‘‘A jury of 11 whites and one black in the Deep South stood up in the courtroom and said that black lives do matter.’’ On February 23, 2020, the McMichaels grabbed guns and jumped into a pickup truck to pursue Arbery after seeing him running near Brunswick, Georgia. Bryan joined the pursuit when they passed his house. It was Bryan who recorded the graphic mobile phone video which later became public. The footage showed Travis McMichael shooting Arbery at close range with a shotgun as the victim threw punches and grabbed for the weapon. The McMichaels later told police they suspected Arbery was a fleeing burglar. 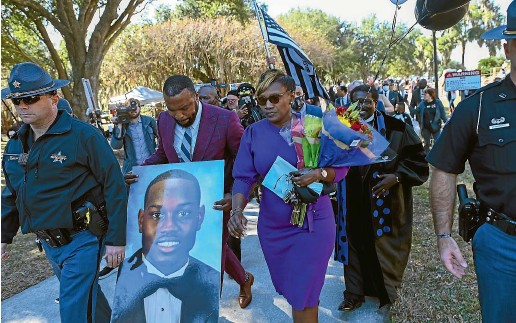