Intimate portrayal of the end of an era

It was supposed to be a way of reinvigorating a jaded quartet. A back-to-basics approach that would result in new music and a televised concert ‘‘for the world’’. Proof that the Fab Four could survive – and thrive – after the death of their beloved manager Brian Epstein 16 months earlier. But, as Sir Peter Jackson’s three-part The Beatles: Get Back documents, in astonishing, lovingly restored and enhanced details, January 1969’s coming together ‘‘did not go well’’. The ‘‘Get Back Project’’ was certainly ambitious. Under the watchful eye of producer George Martin, other executives and director Michael Lindsay-Hogg’s two unblinking cameras, their goal was to write and rehearse 14 new songs in just two weeks, as well as plot a suitably memorable live performance. The deadline was because drummer Ringo Starr was due on set to star alongside Peter Sellers in The Magic Christian in three weeks’ time. The supposed offset was The Beatles got to use one of the soundstages at Twickenham Studios in the meantime – to prepare and potentially perform in. Despite their initial bad vibes about the space (‘‘I don’t think there are very good acoustics in this place,’’ George opines), the foursome begin their sessions very much in harmony – joking, jiving and happily jamming, be it on one of the proposed tunes, or somebody else’s (if you’ve ever wanted to know what a Beatles’ version of Quinn the Eskimo, Midnight Special or Harry Lime’s Theme from The Third Man sounds like, you’ve come to the right place). But, by day three, notes of discord have started to creep in. They’ve only managed to practise four numbers, bassist Paul McCartney is simultaneously trying to motivate them and complaining about ‘‘having to be the boss’’, rhythm guitarist John Lennon looks bored and lead guitarist George Harrison is in a dark mood. ‘‘I’ll play what you want me to play, or I won’t play at all, if that’s what you want,’’ he tells McCartney. ‘‘We’re all like old-age pensioners,’’ comes the exasperated reply, McCartney then suggesting if they can’t come up with something that satisfies them all, ‘‘I think this should be the last for all of us’’. That’s just one of the fascinating and, sometimes, shockingly frank exchanges captured in this truly fly-on-the-wall series. Culled from 60 hours of film and 150 hours of audio, it feels more incredible now that Lindsay-Hogg produced such a bland 80-minute tale (1970’s much derided Let it Be) than that Jackson and his erstwhile serial editor Jabez Olssen have created a magnum opus that runs to 468 minutes. Yes, with a running-time just six minutes shy of combined theatrical running time of The Hobbit trilogy and only 90 minutes shorter than his original Rings cycle (especially when he originally promised a single, feature-length film), it would be easy to argue that the famed ‘‘Jackson bloat is back’’ with a vengeance, but the truth is, on the evidence of the first instalment, hardly a second is wasted. It’s hard not to be fascinated by watching the Fab Four at work (and play), seeing them complain about the catering and discuss the previous night’s television – and that’s before the ennui and seeming fear and loathing really kick in. Anyone who has been in a musical group, whether high-profile or a short-lived high school Beatles tribute band called Splunge, will find the dynamics on display compelling and highly evocative. An opening potted history of the lads from Liverpool’s development, from when Lennon invited his fellow young teenager McCartney to join The Quarrymen to The Beatles’ becoming ‘‘the kingpins of the teen set’’ and the ‘‘top popmusic phenomenon of the century’’ is a small triumph in itself. In around eight minutes, it combines a plethora of eclectic and engaging images (including a brief snippet of the band attempting a hongi and playing with poi on our shores) with a Stars on 45-esque mash-up of their greatest hits until 1968. Other highlights include witnessing early ‘‘drafts’’ of The Long and Winding Road and Let It Be, watching the daily changes in each band members’ fashion choices (turtlenecks-a-go-go), seeing how significant others Yoko Ono and Linda Eastman interact with the musicians (and each other) and eavesdropping on the ‘‘battle’’ around where the final concert should take place. Some of the suggestions, like the Houses of Parliament in London and ‘‘a farm in Scotland’’ are hilarious, and Lindsay-Hogg’s favoured destination of a Colosseum like-structure in Sabratha, Libya, is quite gobsmackingly wild. Then there’s the poignant moment when McCartney appears to hit the nail of their problems on the head. ‘‘Daddy’s gone away, and we’re on our own at the holiday camp,’’ he laments of ‘‘disciplinarian’’ Epstein’s now permanent absence. Among the initial ‘‘disclaimers’’ at the start, Jackson states that ‘‘numerous editorial choices were made’’, while ‘‘attempting to present an accurate portrait of events and people’’ (that is just before a warning about ‘‘explicit language, mature themes and smoking’’ on display). While we’ll never know what half of The Beatles think of it, it’s definitely an improvement on the 1970 version, pithily described by Lennon as ‘‘set up by Paul, for Paul’’. Although it won an Oscar for Best Original Song Score (an award collected by Quincy Jones on their behalf), Lindsay-Hogg’s tale was also lambasted by many in the British press, witheringly described by The Sunday Telegraph’s writer as like, ‘‘watching the Albert Hall being dismantled into a block of National Coal Board offices’’. And, it’s true, some Beatles fans may find watching this extensive, extended look at the band’s last moments together rather distressing, but for the rest of us, this is a testament to Jackson and Olssen’s eye for detail, editing skill and the truly astonishing restoration techniques first deployed to stunning effect on They Shall Not Grow Old and further refined and enhanced here. This was all more than 50 years ago, you say? It looks like it was just Yesterday. Part I of The Beatles: Get Back is now streaming on Disney+. Parts II and III will debut tonight and tomorrow. 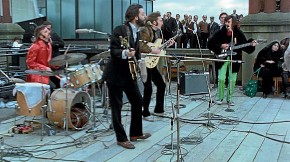