Six months ago, Justin Sangster was driving forklifts for Mainfrieght in Tauranga and was yet to make his NPC debut. Yesterday morning, the 23-yearold took time off work to travel to Wellington to meet his new teammates after signing a contract with the Hurricanes for next year’s Super Rugby Pacific competition. The 1.98m lock was first approached by the Hurricanes after playing just three games for Bay of Plenty, who had only signed him on a development deal, and Sangster said he was still coming to terms with his rapid rise as he rubbed shoulders with the likes of former All Black Julian Savea at Rugby League Park. ‘‘I got a call from Gibbo [assistant coach Chris Gibbes] after my third game and he wanted to have a catch-up. ‘‘We went out for a coffee and had a chat about where I was and where I wanted to be, and it went from there. ‘‘I didn’t really believe it when he rang me up. I was shocked,’’ Sangster said. ‘‘But it’s been awesome. Everyone has been really welcoming; the staff and all the players.’’ Sangster was relatively late to rugby. He did not play as a junior and only picked up the sport when he was a year 12 student at Aquinas College, the former secondary school of New Zealand sprinter Joseph Millar. He said his main sports were basketball, swimming and taekwondo, in which he was a black belt. ‘‘Mum wasn’t too keen on the rugby-side of things. She was worried about me getting injured,’’ he said. Sangster was good enough to get selected for the Waikato under19s in his first year out of secondary school but the dream of playing rugby for a living only really started when he moved back home to Tauranga after graduating from the University of Waikato, and got his foot in the door with Bay of Plenty. He was signed on a development contract at the start of the NPC season but finished as a starting player. Prior to his breakout rookie year, Sangster said his aim was to make his way up the ladder at Mainfreight. ‘‘I started the year as injury cover and it all happened at once this year. ‘‘I was just happy to be part of the Bay setup. Growing up in Tauranga it was always a goal to be part of the Steamers and to get that was awesome, and to get this now is even more unbelievable. ‘‘I had a life plan but that’s changed a bit now. I was going to try make my way up the Mainfreight ladder because it’s a bloody good company to work for, but this has changed things now and I’d keen to see stick with footy for as long as I can and make the most of it.’’ 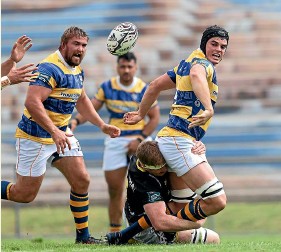