Secret history of the stairs to nowhere 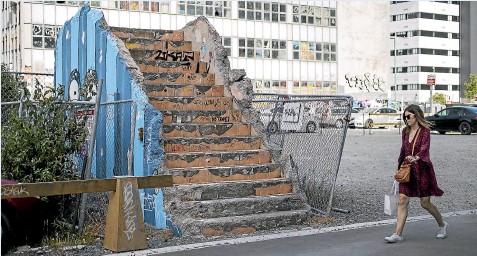 They are known as the stairs to nowhere. The crumbling and battered set of concrete steps sit on an empty lot in central Christchurch. They are the only surviving remnant of a building that once thrived down an alleyway just off Cathedral Square. The building was demolished after the 2011 earthquakes, but the stairs survive as a curious urban attraction and a canvas for the city’s street artists. But where did the stairs once lead? And why have they survived? The answer to those questions involves Star Wars-themed raves, a visit from a Hollywood movie star and a welcoming place for the city’s migrants and refugees. The stairs were originally built as part of a new cinema in 1981. It was called the Mid City and opened to great fanfare with a premiere attended by Hollywood movie star David Carradine. The actor shot to fame in the 1970s as the star of television show Kung Fu and later took the title role in the Quentin Tarantino movie Kill Bill. Former Mid City worker Nick Paris remembers Carradine stayed in Christchurch for two weeks after the premiere of his film, Americana. The movie star even left his hand prints in cement outside the cinema, although no sign of them remains. ‘‘It was quite amazing seeing him, because I spent my life watching Kung Fu,’’ Paris said. ‘‘It was a big thing for Christchurch. I don’t think Christchurch had seen a major Hollywood star come out here before. He was a very laid-back, towering guy. He spent most of his time here smoking pot.’’ Despite the glamorous beginnings, in later life the cinema struggled to compete with its larger competitors in Cathedral Square, which had a stranglehold on the major releases. To keep the doors open, it turned to more lowbrow entertainment. ‘‘There were definitely titty double features, titty trifectas and nipple triples,’’ Paris said. ‘‘It paid the wages, you know.’’ Many years later, Paris took over the cinema and turned it into a Bohemian arthouse attraction. He hosted a gig by Anglo-French Indie band Stereolab and even held a Star Wars-themed rave. ‘‘It was kind of like Woodstock for the George Lucas generation. ‘‘Until a bunch of about 12 cops marched in at about one in the morning and unplugged all the amps. They all stood in a row with their arms folded and closed us down due to the noise levels.’’ The cinema eventually closed its doors for good at the end of 1999. But the building, and those stairs, had another lease of life. The building became home to the Peeto Multicultural Learning Centre, a place that helped refugees and migrants in Christchurch and provided English lessons. Former director Patrick O’Connor feels cheered that a remnant of the centre’s former home still survives. ‘‘There would have been hundreds, if not thousands, that would have gone through the school, from up to 50 ethnicities. ‘‘[The stairs’ survival] just illustrates to me the defiance of the culture and the physical building that we loved so much. ‘‘It is still here saying: ‘To hell with earthquakes, we are not going away’.’’ The building was eventually demolished after the 2011 Canterbury earthquakes, but the stairs remained. The reason they were not demolished lies behind a small wooden door in the side of the stairs. Behind the door is an electricity transformer owned by power company Orion. The structure is not only a set of stairs, but also houses part of the city’s infrastructure. The power equipment will one day be integrated into any new building that occupies the empty plot. But, until then, the stairs have become a popular canvas for the city’s street artists. A colourful work by Christchurch street artist Yikes is wrapped around three sides of the concrete structure and tags pepper the terracotta tiles on the steps. But, as well as being a canvas for artists, the stairs have also inspired them. Artist Ghost Cat, also known as Mike Beer, has made a perfect miniature version of the stairs to nowhere. He felt inspired the moment he first saw them. ‘‘They just spoke to me. I had to make them. ‘‘It’s this lost relic, almost. It’s part of something that used to exist in Christchurch. ‘‘Also, it’s stairs that drop off to nowhere. I don’t know why, but that is pretty cool.’’ Paris is also heartened that a small remnant of his old cinema has survived and become a curious part of the recovering city. ‘‘It’s a piece of art really. ‘‘It’s a stairway to heaven, isn’t it? Well, for me, it’s a stairway to heaven.’’