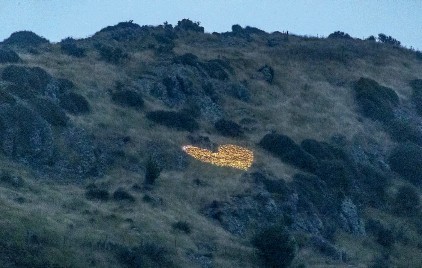 A giant heart on Christchurch’s Port Hills made using up to 14,000 solar lights is intended to ‘‘lift spirits’’, its creator says. The illuminated heart, which is about five metres long and six metres wide, was first seen on the Governors Bay side of the hill about two weeks before Christmas. It is visible from Dyers Pass Rd and a few households and lookouts around the bay. Creator Louise McHaffie never intended to take credit for the heart until The Press tracked her down. While the heart is at the uppermost point of her land, it can’t be seen from her home. ‘‘It’s a reminder for others to live and love,’’ she said. McHaffie made a smaller light heart in her garden during the first Covid-19 lockdown in March 2020 to ‘‘lift spirits’’. She experimented with an unsuccessful sunflower version, before deciding on a huge heart higher up in the hill, just in time for Christmas 2021. ‘‘It’s just a nice thing for people,’’ she said. ‘‘I like surprises and the environment we are in at the moment . . . an unexpected surprise [such as] a heart made of sparkly lights seemed a good idea.’’ The heart took about 12 hours to finish over several days. ‘‘People are struggling with how the world looks today, so it’s just an unexpected thing to give a lift at the end of the day, or the start if you’re up early enough.’’ Its creation required several solo missions where McHaffie carried a mixture of solar and fairy Christmas tree lights in backpacks up the hill to the site. She was familiar with the hillside area above her property as she had walked a nearby track often in the past. ‘‘My family think I’m bonkers. The whole thing was that it was going to be anonymous, I like to fly under the radar. But you found me.’’