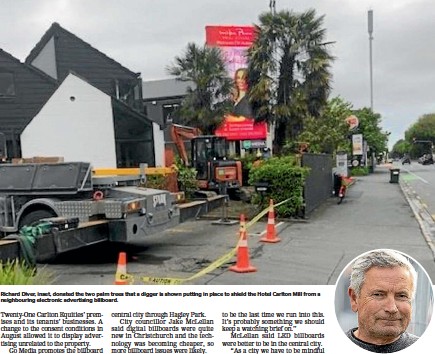 When the bright light from an electronic billboard stopped a hotel operator putting guests in his front unit, his friend Richard Diver took action. The illuminated LED billboard sits 2.5 metres from the boundary of the Hotel Carlton Mill near Hagley Park in Christchurch, and less than 5m from the windows of the front unit. It can display a new advertising image every eight seconds. When he heard about his friend’s problem, Diver brought in a digger and a crane. He dug two tall palm trees out of his own garden, then had them replanted on the hotel grounds, squarely in front of the troublesome sign. The 18-square-metre digital billboard was erected with resource consent from Christchurch City Council. The consent was not publicly notified. ‘‘It was like a disco inside those rooms, with the sign flashing away at night. I don’t believe the council should have granted a consent for it,’’ said Diver, a city property developer and landlord. He also thought the sign spoiled the view from the tree-lined road through Hagley Park. The hotel operator, who did not want to be named, said he had unsuccessfully fought the council since the billboard was installed a year ago. The Bealey Ave site is also home to Strawberry Fare restaurant. He said the changing coloured lights from the sign led to complaints from guests, and he had to leave the front unit empty. The unit had also previously been used as a manager’s residence. ‘‘If you sat on the couch during the day, your legs changed colour, and it was worse at night,’’ the operator said. ‘‘People complained.’’ He said he even got his lawyer involved. ‘‘But we were never identified as an affected party by the council. We were shocked when it managed to get through the system.’’ The billboard was erected by Twenty-One Carlton Equities Ltd, the owner of the office building next door. It is operated by one of its tenants, marketing company Go Media, which sells advertising time on the sign to its clients. The billboard’s consent allows it to run for 19 hours a day, from 5am to 1am. After the palms were planted just inside the hotel’s boundary, Go Media switched off the sign and has now received a follow-up consent to shift it to the other side of the premises. The hotel operator said the new site meant the billboard would now have only a minor effect on his business. He said that after communications with the council failed to get the sign shifted, an engineer suggested trees as the best solution. He said he had no problem with electronic billboards in the right place. ‘‘We were very pleased that Richard got involved and helped us out,’’ he said. Diver said he was happy to have donated the trees, but remains concerned about the increasing number of large illuminated billboards in the city. He said they can cause a nuisance and can remove the incentive for property owners to develop bare sites, and the council should publicly notify the resource consent applications. The Go Media billboard was consented as a replacement for an earlier static sign advertising Twenty-One Carlton Equities’ premises and its tenants’ businesses. A change to the consent conditions in August allowed it to display advertising unrelated to the property. Go Media promotes the billboard as a ‘‘premium digital site’’ targeting traffic approaching the central city through Hagley Park. City councillor Jake McLellan said digital billboards were quite new in Christchurch and the technology was becoming cheaper, so more billboard issues were likely. ‘‘Planning rules have to change with the times, and this isn’t going to be the last time we run into this. It’s probably something we should keep a watching brief on.’’ McLellan said LED billboards were better to be in the central city. ‘‘As a city we have to be mindful and make sure that we are on top of these things.’’