Oscar nominations a safe bet for feel-good yet credible portrait 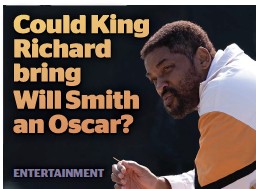 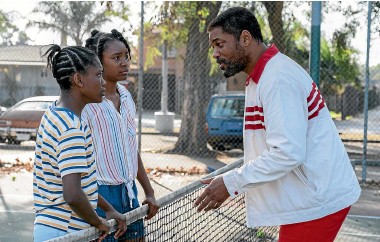 King Richard (M, 144 mins) Directed by Reinaldo Marcus Green Reviewed by ★★★★ We have been sold a picture of Richard Williams – dad to tennis stars Venus and Serena – by a media machine that cannot rest until everyone it touches has been assigned a character and a role to play. Williams, or so we’ve been told, is famously pushy, controlling and ‘‘difficult’’. How ironic then, that it might take a fictionalised film to redress the balance and give us a more credible portrait of the man than journalists have managed to. Director Reinaldo Marcus Green (Monsters and Men), working from a script by newcomer Zach Baylin, fashions Williams’ story as a triumph of self-belief over environment. The Williams family lived in Compton, the legendarily rough and crime-ridden city in Los Angeles County. There, Oracene and Richard Williams raised five young women – Venus and Serena plus three older girls from Oracene’s first marriage. King Richard focuses entirely on a handful of years before the sisters were famous, as Richard works two jobs and then spends every evening and weekend training his daughters. He famously wrote an 80-page plan for their careers and apparently never doubted that one or both of the girls would be at world champion level one day. The story you are expecting – the one the trailer lays out – is all here. But King Richard is also a more layered film than the marketing hints at. Williams is a complex and occasionally troubling character, played here by Will Smith in his finest performance to date. Smith was nominated for an Academy Award for Ali and for The Pursuit of Happyness. I wouldn’t bet against this being the year he finally wins. When King Richard irks, it is because of what it does not show us, rather than what it does. Oracene’s part in her daughters’ training and development is surely underrepresented here. But so is the skill and heart of the girls themselves. By highlighting their father’s undoubted immense drive and resourcefulness, the film does occasionally make the sisters a little too passive in their own story. Next to Smith, Aunjanue Ellis (When They See Us) is terrific as Oracene, while Saniyya Sidney and Demi Singleton are genuine and believable as Venus and Serena. King Richard is a truly feel-good story. It is well told, beautifully shot by veteran Robert Elswit and written to take us past the headlines to somewhere that feels authentic and human. Award nominations – a few, at least – seem happily inevitable.