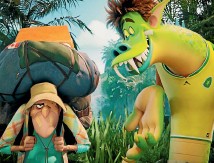 Hotel Transylvania: Transformania (PG, 88mins). Directed by Jennifer Kluska and Derek Drymon Reviewed by You know a franchise is in trouble when even Adam Sandler and Kevin James decide they’ve had enough. This is the duo who thought Grown Ups 2 was a good idea. Even the biggest box office of the trilogy couldn’t persuade the comedians to return to a fourth instalment, after 2018’s Summer Vacation marked a definite step down in the animated adventure’s quality and consistency of laughs. The voice-acting cast boasts a deep bench of talent, from WandaVision’s Kathryn Hahn to Andy Samberg, Selena Gomez, Fran Drescher and Steve Buscemi, but they are poorly served by the trio of writers. Included in that trio is series creator Genndy Tartakovsky, who vacated directorial duties for the first time to allow CatDog’s Derek Drymon and Wild Kratts’ Jennifer Kluska to take the helm. Transformania’s main problem stems from reducing one of the series’ strengths – the supporting characters – to just a few lines each, as the story essentially becomes a globetrotting buddy comedy featuring Sandler-replacement Brian Hull’s Drac and his human son-in-law Johnny (Samberg). Their misadventures begin when the former is persuaded by daughter Mavis (Gomez) to let Johnny help organise the hotel’s 125th anniversary celebrations. Determined to deliver an overthe-top spectacle, it all goes pearshaped and leaves Drac having to literally put out fires to ensure things run smoothly. It also leads him to have major second thoughts about a big announcement he has been teasing. Girlfriend Erica (Hahn) had persuaded him to retire and hand over the business to Mavis and Johnny, but the prospect of the establishment undergoing a ‘‘full Johnny makeover’’ is already filling him with dread. So it is fear, more than anything, that drives Drac’s replacement announcement that the hotel will be adding a new restroom to the lobby. Anger and disappointment follow, with Drac attempting to explain his decision away with the discovery of a ‘‘very ancient, very serious’’ property law that means Johnny cannot own the hotel because he is not a monster. Having overheard their conversation, Van Helsing (Jim Gaffigan) offers a solution in the form of his Monsterfication ray. Johnny is delighted with his new look and eager to show it off. But the reaction isn’t what he expects, Drac’s attempts to reverse it go horribly wrong, and its effects become dangerously unstable and potentially unalterable. Transformania works best in the moments where the creatures are de-monstered. Frank’s reinvention as a Joey Tribbiani-style looker, werewolf Wayne’s recalibration as a bearded hipster and Blobby’s transformation back into a plate of jelly provide genuine laughs, but they are too few and far between. Instead, we have to endure Drac’s battles with sunburn, blisters and swampfoot, as he and Johnny journey through South America, bond and discover their mutual ‘‘inner gooeyness’’. The result is a sickly sweet confection that surely spells the end of this now decade-long series.