Fun, idolatry and rants of a maverick 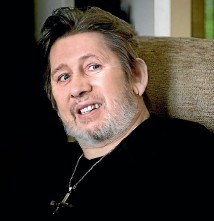 Crock of Gold (R16, 124mins) Directed by Julien Temple Reviewed by James Croot ★★★★★ Fresh from delighting audiences at November’s New Zealand International Film Festival, this cracked, craic-filled, crack-up of a documentary more than lives up to its cheeky subtitle of A Few Rounds with Shane MacGowan. As irreverent and eclectic as its now 64-year-old subject, the hardliving, somewhat mercurial, undoubtedly talented, selfconfessed ‘‘saviour of Irish music’’, Crock of Gold offers up an amazing array of scarcely believable tales, rants, on-camera petulance and copious consumption of alcohol. Director Julien Temple (whose previous subjects have included the Kinks’ Ray Davies, the Clash’s Joe Strummer and Madness’ Suggs) captures all the chaos, the melancholy, the passionate storytelling and the sometimes whip-smart ribbing of his drinking buddies (especially one of the movie’s producers, Johnny Depp) in all its often ribald and occasionally regret-filled glory. This is a man who has truly lived – and probably very nearly died on more than one occasion. If you’ve only ever associated the former Pogues frontman with the festive favourite Fairytale of New York and his distinctive teeth, you’re in for a shock – and a real two-hour treat. For Kiwis, the headliner here has to be his vivid ‘‘recollection’’ of a drug-fuelled, dead Ma¯ ori warriorinspired repainting of a Wellington hotel room. It’s one of many moments where the lack of archival footage is more than made up for by some magnificent thematically and stylistically appropriate animation. I particularly loved how his detailing of life as a schoolyard drug dealer was illustrated by moving drawings that looked as though they had been lifted from the pages of era-appropriate British comics such as The Beano or Whizzer and Chips. You also get a real sense of his wild – and sometimes troubled – early childhood in Tipperary. His home with an outside toilet. Having to share a bed with his Aunt Nora who smoked like a chimney and helped turn him into a ‘‘religious maniac’’ by age 4. By 5 he was regularly drinking stout, as he learnt catechism as well as the delights of drinks, smokes, chocolate and betting on horses. ‘‘I could do whatever I wanted as long as I went to mass,’’ his voiceover twinkles. At 6 came his first nervous breakdown, once he’d shifted to England. Finally giving up all notions of a career in the priesthood five years later, he was kicked out of school early, delighted in the paid joy of working in a supermarket and ended up spending six months in Bedlam. He emerged having freaked everyone out with his paintings and having become far more proficient at the guitar. ‘‘The first band that I saw when I came back out was a group who looked like they should be in the loony bin – the Sex Pistols,’’ he says, chuckling, before detailing how his former top model and brilliant singer mother demanded that he justify his subsequent new punk haircut by becoming famous. Alter ego Shane O’Hooligan was born and made regular media appearances, mostly notably after his ear was bitten off at a Clash gig. Then, as tastes shifted to what MacGowan describes as the awful era of one-guy-and-a-synth and ‘‘world music’’, he decided to make it his mission to promote the songs and sounds of where he came from – and the Pogues were born. What follows is an often jawdropping, at times heartbreaking look at their rise and fall – how their roaring success ended up becoming overwhelming as they and those around them looked to capitalise on their popularity as much as they could. There are accounts of Beach Boys records being consumed, regular pre-loading before gigs, and the creation of beloved songs such as A Rainy Night in Soho. But instead of spoiling it all, I’d rather encourage you to discover the other delights of this audience with a true musical maverick yourself. This is a magnificent and tragic portrait of a sometimes tortured artist whose legacy is not only the ‘‘most played Christmas tune of the 21st century’’ so far (which he claims he hates), but also a collection of memorable ‘‘songs of redemption and sorrow about ordinary people’’. Crock of Gold: A Few Rounds With Shane MacGowan is now screening in select cinemas nationwide.