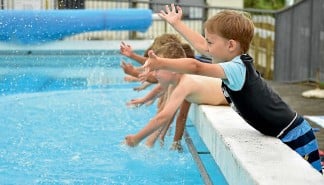 At more than $100 a term, and long wait lists, swimming lessons are a ‘‘massive’’ financial burden for families, Water Safety chief executive Daniel Gerrard says. But a former Olympic swimming trainer and swim school owner said the price of life doesn’t even compare, while another swim teacher said after-school swimming lessons should only be to further skills if the Ministry of Education’s swimming curriculum was run better. ‘‘There will always be some people that have limited discretionary funding. However, how do you put a price on a life?,’’ Auckland swim school, SwimTastic, owner Mark Bone said. More than 30 people have died since the beginning of December, even more than the total for all of last summer, and the worst number of drownings in more than 40 years. ‘‘At any time, no matter your age or ability of swimming, something can go wrong,’’ Bone said. ‘‘What can help prevent a drowning from occurring is for those in these situations to have experienced water safety education and swimming lessons.’’ Water Safety New Zealand say that each year there are 20 million visits to public pools, 3.5 million people visit beaches, 4.5 million go boating, more than 1.1 million participate in swimming and more than 700,000 go fishing. There are hundreds of swimming lesson businesses throughout the country to cater to water habits, with larger cities having a public pool in almost every suburb. Bone said his school had waiting lists for almost all of its classes, but a lot of it was because of clients trying to book time slots straight after school. Swimming lessons vary between council facilities and private facilities. In general, council lessons are cheaper and range from $15 to $18 a lesson, but are at a public pool. At private facilities and swim schools, lessons range from $18 to $24 a lesson. In Australia, learn-to-swim lessons were GST exempt, with an emphasis on spending government money in the sector to help give all children the opportunity to learn to swim, which Bone said New Zealand needed to follow. An Otago University study in 2017, involving eight Dunedin schools, found two-thirds of children were unable to swim 100 metres. Water Safety New Zealand’s swimming skills national database showed in 2011 only 29 per cent of 12-year-olds could swim 200m – considered the survival benchmark. Earlier surveys found a quarter of 10-year-olds could not even float and half could not swim 25m. Gerrard, who was ‘‘blown away’’ by the number of drownings this summer, said swim schools were crucial for children. ‘‘But these are businesses. They’re set up to be profitable entities, so the good ones will always have a waiting list,’’ he said. ‘‘There’s no question at all, the financial burdens on families are massive.’’ Todd Morton, owner of Wellington swim school Easyswim and former Olympic swimming trainer, said if the school swimming programme, run by the Ministry of Education, was consistently implemented, after-school swimming lessons would only need to be used for furthering skills. ‘‘There will always be people who will never go to private afterschool lessons,’’ he said. It needed to be covered at school, better than it was being covered now, he said. Ministry of Education curriculum deputy secretary Ellen MacGregor-Reid said swimming was part of the curriculum, and it was expected that all students had opportunities to learn basic aquatic skills by the end of year 6. ‘‘It points out that parents, families and wha¯nau also play an important role in keeping children and young people safe beyond school,’’ MacGregor-Reid said. The ministry did not fully fund school pools, but it did provide annual operations grants to run the school and deliver the curriculum, which could be used either to run and maintain a school swimming pool, or for travel and entry to a public swimming pool, she said. But Morton said the programme ‘‘is a bit up and down’’, and he had not seen consistent funding for it over a sustained 10-year period. ‘‘If we want to have an impact we need to increase the funding and the quality of the schools swimming programme at a minimum. ‘‘Eight lessons is not even enough. That’s only four hours in the pool every year for kids who perhaps aren’t even doing afterschool lessons.’’ But families were prioritising other after-school activities, he said. ‘‘For some people it definitely is a cost issue, but there is an equal amount of people not swimming because it’s a priority issue. But if you want to go further and get real results, the private sector and afterschool lessons are critical.’’