The all-new C4 is a true crossover, even though Citroen still claims it is a hatch, writes Nile Bijoux. 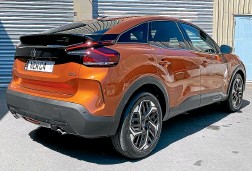 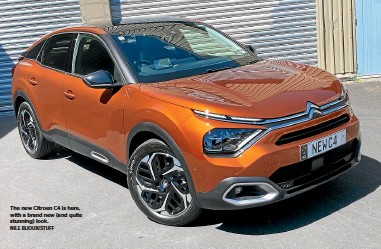 Citroen’s all-new version of its C4 hatch has finally made its way to New Zealand, with its new styling putting it much closer to the small SUV segment, though still retaining some of its hatchback charm. However, Citroen insists it is a hatchback and most definitely not an SUV. Which is refreshing . . . How all-new is it? All all-new. The C4 now sits on the former PSA Group (now part of Stellantis) EMP1 architecture, which brings new engines, more technology and lots of general improvements over the outgoing PSA PF2 platform. Europeans get the choice of a 1.3-litre turbo diesel inline four or a 1.2-litre turbo petrol inline three-cylinder engine, while we just get the petrol. If it sounds familiar, that’s because it also features in Peugeot’s 208 hatch and 2008 SUV. Citroen only takes the highoutput 113kW version, though, while Peugeot has a range of power outputs. The engine is bolted to an eight-speed automatic, also featured in Peugeot’s offerings, driving the front wheels. It’s a turbo-charged unit with no electrification, although Citroen has told us that the allelectric e-C4 that uses the same bones as the Peugeot e-2008 will be making its way here next year. The C4 gets a bunch of new safety stuff too, such as adaptive cruise control with stop/go, traffic sign recognition, automatic emergency braking, blind-spot monitoring, and lane-keeping assist. That old platform lasted ages. Will this one last too? Citroen was using that PF2 platform for the C4 until 2020 (and, in fact, still does in Russia where it still builds the old C4 sedan), and it first debuted for the brand in 2004 underneath the original C4. Sixteen years is quite a while to be on one architecture, but Stellantis plans to shift all of its offerings over to one of four new platforms: STLA Small, Medium, Large and Frame. The C4 will eventually move to the STLA Small platform and will feature plenty of electrification. That move will probably happen by about 2026, at least for the electric version, with any combustion versions to follow later. So is this new C4 worth it? If you’re in the market for a hatchback that is probably closer to a small SUV, and aren’t interested in the usual stuff, then yes. The new C4 is quite brilliant. The fresh looks give it a mean face, punctuated with chrome lines that meet in Citroen’s double chevron logo. There are narrow daytime running lamps below the bonnet line, chunky main headlights below those, and small foglights on each corner of the bumper. The rear end gets an interesting crisscross of LED strips, as well as a small spoiler and twin exhaust pipes. You couldn’t really say Citroens look like any other car on the road, in the best way. Better than a Peugeot 208 or 2008? Up to you, but I think I’d take the Citroen. Both brands have similar interiors, though Citroen has a funny case that lets you mount an iPad to a drawer that pops out of the dashboard. Good for the kids, I suppose. Using the new Peugeot drivetrain means the C4 has that cool burble that only a triple can produce, while also making good power and keeping emissions and consumption low. The 6.8L/100km is fairly easy to replicate in the real world too. The stop/start system is a bit of a pain, as it is in the Peugeots. Citroen combined the best of the hatchback and small SUV worlds, as the lifted C4 is easier to get in and out of than your typical hatchback but the roofline is still nice and low. The sloping rear doesn’t impact much on rear headroom, and it helps with aerodynamics. It does reduce rearview visibility, and the rearview camera is a bit poor for modern standards. The drive is good, with Citroen’s ‘‘progressive hydraulic cushion’’ suspension doing well to smooth out most bumps in the road. It works well at low speeds without sacrificing much agility at higher rates, and Peugeots don’t get it. Another point for the C4. Take that point away, though, because the C4 recently missed out on a five-star safety rating from the Australasian New Car Assessment Programme, getting four stars instead. The 2008 has five stars, and the 208 hatch got four stars from the European New Car Assessment Programme. Should I wait for the electric one? The all-electric e-C4 uses a 100kW motor with a 50kWh battery, like its Peugeot siblings do, and we quite liked the e-208 when we had it a while ago. Since we don’t have a due date other than ‘‘sometime next year’’ yet, it’s hard to say whether or not you should wait for one. But Peugeot has e-208s and e-2008s here now, so if you’re so-so on the Citroen design, go check those out.