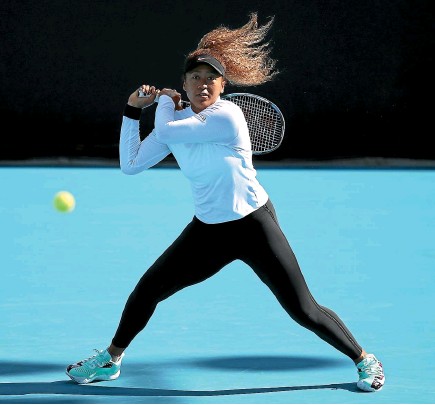 Naomi Osaka has just been listed as the No 1 women’s earner in global sport after her most trying of years, but it’s the prospect of her becoming the world’s top tennis player again that must really preoccupy her rivals. Japan’s double Australian Open champion is back at her ‘‘sunshine slam’’ with a smile on her face on Rod Laver Arena that suggests she’s determined to enjoy her title defence in Melbourne. Osaka’s long absences from the circuit last season, as she prioritised her mental health, saw her ranking slip to No 14, but that’s made the fourtime grand slam champ a dangerous floater in the Open draw as 13th seed. Even though world No 1 Ash Barty has a wonderfully pragmatic approach to the minefield of grand slam draws, shrugging that you can only beat who’s in front of you, even she presumably won’t relish the idea of a fourth-round duel with one of the few players with a game to disarm her. According to the Forbes list released on yesterday, Osaka made US$57.3 million (NZ$83.48m) in prizemoney and endorsements, before tax, in 2021, being the highest earner by a significant margin, with fellow tennis star Serena Williams second with US$45.9m (NZ$66.87m) and Williams’ sister Venus third with US$11.3m (NZ$16.46m). Olympic gymnast star Simone Biles was named fourth with $10.1m (NZ$14.71m) and another tennis player, Garbine Muguruza, rounding out the top five with $US8.8m (NZ$12.8m). Forbes said nearly all of Osaka’s earnings came from an endorsement portfolio that has added more than ten brand partners over the last year and a half, including Louis Vuitton, Sweetgreen and Tag Heuer. Osaka remains a compelling attraction in the sport and a last-16 clash with Barty – who was eighth on the Forbes list with earnings of US$6.9m (NZ$10m) – would be a showstopper. Osaka sounded upbeat as she told Nine Network’s former doubles star Todd Woodbridge about how she’s returned to the circuit with a spring in her step after four months away. ‘‘It feels really amazing, like it’s an honour to be back here and just to come and see everyone so happy and smiling,’’ she said. ‘‘I kind of consider the Australian Open to be the ‘Sunshine Slam’. It feels really amazing to be here.’’ Asked what she’d learnt about herself during her sabbatical, the 24-year-old responded: ‘‘I didn’t know if I learned about myself or if I just learned what I want to do more, to be more patient with myself.’’ She hoped it would translate to her performance on court too. ‘‘Just being more patient and forgiving, not being so quick to judge myself on the things that I do wrong and instead trying to celebrate the things I do right,’’ she explained. At Melbourne Park, she’s seemed to do everything right, having won 16 of her last 17 singles matches and taken the title in two of the last three editions. ‘‘I feel like the beginning of the season is a bit tricky because you’re extra nervous and don’t want to lose in the first round of the first slam of the year, but just embracing the energy here for me always works well,’’ said Osaka, who faces world No 53 Camila Osorio in the opening round. Osaka won her three comeback matches at the Melbourne Summer Set last week before pulling out before her semifinal to protect a slight abdominal injury which she doesn’t believe will hamper her. South Korean golfer Ko Jin-young (US$7.5m – NZ$10.9m), Indian badminton player P.V. Sindhu (US$7.2m – NZ$10.5m), golfer Nelly Korda (US$5.9m – $10.5m) and basketball player Candace Parker (US$5.7m – NZ$8.3m) were the other athletes in the top 10.