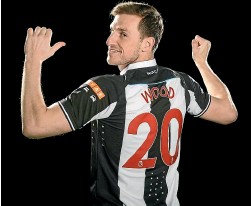 Chris Wood has had a remarkable football career since he first left New Zealand for England as a teenager 14 years ago. But the 30-year-old has never had to deal with the kind of pressure set to come his way over the next six months, for both club and country. Last weekend, he was playing for a Burnley team battling to stay in the English Premier League. This weekend, after a $40m transfer, he’ll be playing for a Newcastle United team battling to stay in the English Premier League. But those battles aren’t the same. Burnley have done well to stay in the world’s biggest football league for six seasons straight and Wood more than played his part in keeping them there, scoring 49 goals in 144 appearances. But they had only been there twice previously, for a season at a time, since the inception of the Premier League in 1992. Newcastle, on the other hand, have been there for all but three seasons. They are now considered one of the richest – if not the richest – club in the world, following the takeover by a consortium led by Saudi Arabia’s Public Investment Fund last year, and should be up there with the likes of Manchester City, Paris Saint-Germain, and Real Madrid in no time, competing at the pointy end of the Uefa Champions League. If they go down to the Championship, they will almost certainly come straight back up. But going down will hurt them more than it will hurt Burnley, and it will be another blow to their long-suffering fans, 50,000 of whom flock to St James Park every other week, expecting success. Wood’s task may be the same as it was seven days ago – scoring goals to get the wins to lift his side out of the bottom three to safety – but there will be more eyes, and more pressure, on him than ever before. The challenge starts this weekend, when Newcastle host Watford, who currently sit in 17th, just above the drop zone, with two more points to their name. A win would lift Newcastle above them, but a loss would leave them with an even bigger mountain to climb. More New Zealanders will be paying attention to the result of that match, which kicks off at 4am on Sunday (NZT), than would have been planning to a week ago. It’s a big deal for the game here that the country’s best player has been all over the media in the United Kingdom this week. But Wood’s success leading to success for Newcastle will be a different spectacle for many neutral fans than when his success led to success for Burnley, an underdog club it was easy to root for if there ever was one. That Saudi Arabia, through its national investment fund, has been allowed to take control of a football club is a travesty. The assassination of Washington Post journalist Jamal Khashoggi in 2018, the country’s use of the death penalty, the war it’s waging in Yemen, and its attitudes towards women and LGBTQ+ people are some of the many reasons why the Premier League should have prevented the sale. But it didn’t, so New Zealand now has to grapple with what it means if Wood’s goals help the Middle East’s latest sportswashing effort succeed. Newcastle’s newfound status made this move possible. Wood never expected anyone would meet the $40m release clause in his Burnley contract, and it is a significant overspend for the 30-year-old, especially as he is in the middle of the least productive season of his club career. But money is no object for the Magpies any more, so he was able to get what will likely be the last upward move of his career, at a time when the prospects for one weren’t looking great at all. A change of scenery could be precisely what Wood needs to rediscover his goalscoring touch, but Newcastle aren’t the only team in need of his goals this year, however, and that is why the coming sixmonth stretch is set to be one of the most intense periods of his career to date. Wood had his first taste of the Premier League in 2009 with West Bromwich Albion, but it took eight more years for him to become a regular in that competition by joining Burnley. He went to a World Cup with the All Whites in South Africa in 2010, but only made appearances off the bench. He desperately wants to go to a World Cup again and has Qatar in November squarely in his sights. He’s a chance to try to go again in 2026, but he’ll be older then than any current All White is now, so there’s also a chance this could be his final shot. Will he link up with the All Whites in the United Arab Emirates this month, for their friendlies against Jordan and Uzbekistan? Wood has always been committed to playing for his country and that won’t change now, but this week will have been a whirlwind for him, and Danny Hay, his national team coach, might feel there are gains to be made from letting him stay with his new club, who are set to be holding a warm-weather training camp in neighbouring Saudi Arabia, which could even make popping in and out a possibility. Wood won’t be there when Oceania World Cup qualifying starts ahead of the March international window, so there will be value in giving those who will be more playing time this month. New Zealand won the Oceania final without Wood ahead of the last World Cup, albeit only in a penalty shootout. Having him for this year’s one at the end of the March window, and for the intercontinental playoff in June that would follow with a win, is what matters most. Getting this move is the biggest moment of his football career so far, but he’ll be hoping there are others to top it between now and then.