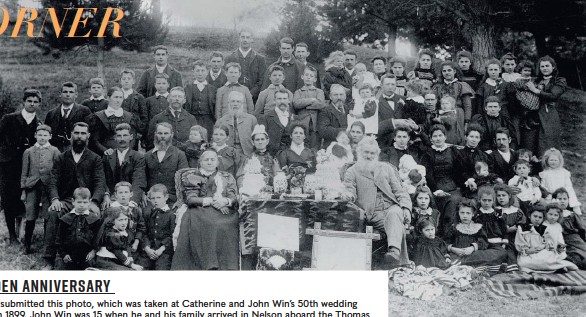 Jeff Wastney submitted this photo, which was taken at Catherine and John Win’s 50th wedding anniversary in 1899. John Win was 15 when he and his family arrived in Nelson aboard the Thomas Harrison on October 26, 1842. Some of the surnames of the extended family are the origins of Nelson place names, such as Win Valley and Cozens Valley. Jeff’s grandmother, Evelyn Win, is seated on the ground at the very bottom left of the photo. She was 6 at the time – and Catherine and John were her grandparents. Evelyn had three daughters, the two surviving daughters – including Jeff’s mother Molly, 99 – currently live in Richmond. Jeff has identified just about everyone in the photo and has a spreadsheet of who’s who, but he’d love to know more, so email him at jeffreywastney@gmail.com if you have any more information about the Wins, or if you in fact are also a descendant of the pair and would like to know more.