YEE-HA! THE BRITISH ARE COMING

American actors are losing the Wild West to well-accented arrivals from across the pond, writes Keiran Southern. 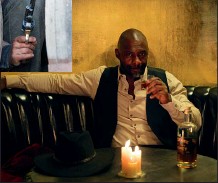 They have played American detectives, civil rights leaders and even presidents. Not even Martin Luther King or Abraham Lincoln, two of the most revered gures in United States history, were o limits. Now British actors are taking on perhaps Hollywood’s most iconic role – the cowboy. Benedict Cumberbatch is attracting Oscar buzz for playing a domineering Montana rancher in Jane Campion’s The Power of the Dog, Idris Elba stars as a gunslinger in The Harder They Fall and Tom Blyth will portray one of the most infamous outlaws of them all in Billy the Kid, a television drama. Hollywood’s embrace of British cowboys may not be good news for the next John Wayne or Clint Eastwood but the trend is proving a bonanza for dialect coaches, who are in high demand to ensure foreign stars do not let slip that they are more estuary English than Wild West. Denise Woods, who worked with Elba on his accent for The Harder They Fall, says there has never been a better time to be a voice coach “because people more than ever are realising that it is just as important to not only look like you come from a speci c place or period but to sound like you do as well”. Woods, who has also worked with the Oscarwinning stars Halle Berry and Mahershala Ali, has seen the good, the bad and the ugly of Western accents and has advice to avoid sounding like an extra from Dallas. “It’s nding the right amount of the ‘r’ sound so it doesn’t sound too heavy-handed and it’s authentic enough to sound like you’re from the West,” she says. British accents are more “consonant driven”, according to Woods, and the “rhythm has a tendency to be a bit more percussive”. Conversely, the Western dialect “is not percussive at all”. She said: “It’s spread out and vast, like the scenery in the West. That blasted ‘r’. If it’s too much, it’s a dead giveaway.” She says that trained actors accustomed to picking up new ways of speaking could usually master the Western accent in about four to six weeks. “It’s not their rst rodeo, pun intended,” she says. Hollywood casting agents o en look across the Atlantic when seeking actors to ll American roles in Western films. Christian Bale appeared in lead roles in 3:10 to Yuma and Hostiles, Tom Hardy starred alongside Leonardo DiCaprio in The Revenant and Daniel Craig portrayed an outlaw in Cowboys & Aliens. The trend extends across genres. Daniel DayLewis had the title role in Steven Spielberg’s 2012 biopic Lincoln, David Oyelowo played King in 2014’s Selma and Dominic West had one of television’s best-known roles as detective Jimmy McNulty in The Wire. The British invasion of Hollywood is not new, but American talent may never have faced such sti competition from across the Atlantic as it does today. Leigh Dillon has been a dialect coach for 40 years and has helped British actors including Clive Owen, Daniel Radcliffe e and Ben Chaplin get their tongues around an American accent. She said that acting schools in the United Kingdom and even Australia had recognised the need for their students to be able to convincingly portray characters from the US. That may be bad news for the natives, according to Dillon. “American actors would o en say, ‘I don’t need it, why am I in speech class in an American training programme? I already have an American accent,’” she said. “My answer was, ‘You better be able to do a lot more than that because you’re going to have some sti competition. You’re going to have actors coming here from other countries, including the UK and Australia, and they’re being trained to do a lot of American dialects and they’re going to do them very well. They are your competition, so don’t be lazy.” The success of British actors across the pond may partially be down to a mistaken belief that they are more talented than their American counterparts, according to Woods. “I don’t necessarily think that the British are better actors or can do dialects better than anyone else,” she said. “Hollywood is preoccupied with the British mystique.”