Beth Parker, 29, is a wedding planner and co-owner of Tarureka Estate, a wedding/event venue in Featherston. She bought the business with her husband Reid Corleison, 31, a builder, in July 2020. The couple live on-site at Tarureka Estate with their daught

AS TOLD TO SHARON STEPHENSON 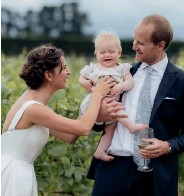 REID: I was born in Wellington, the youngest of four siblings. I wanted to be a pilot and flew helicopters for a while until the company went bust. I had been single for a while when I met Beth. I was in my mid-20s and looking to settle down. I had been on a few inder dates but nothing ever stuck. I messaged Beth a few times via inder but she was always out of town. he third time she was in Wellington so we arranged to meet at a bar. I had intended to go home and get changed but was working on a building site in ourtenay lace and had a few drinks after work and ran out of time. My first impression of Beth was her looks – she is very beautiful. She is just my type – a petite brunette. But she was also a lot of fun, up for any challenge and has a great sense of humour. Since having rla, she is a fantastic mother. I knew early on that Beth was the one. She met my family and uickly became part of it. She has a close family back in the and my family are like that too. My mother Linda is like her second mother. It was not a tough decision to work together. It is been easier because we have different roles – Beth does all the wedding side of things and works with the couples, while I have renovated the lodge and look after all the gardens. No-one is the boss, we make decisions e ually. I actually like being with Beth 2 . We moved to Noosa for six months in 2019. It was coming up to our fourth anniversary together and I decided to propose on that day. I found a jeweller online who lived in rural Queensland so I drove out there and designed the ring. I had it all planned – I was going to propose on the beach. But the day of our anniversary it was raining so instead we went out for dinner. I was wearing shorts because it was still 0 degrees but I could not put the ring box in my pocket as it stuck out and Beth would have asked me what it was. So I ended up putting it down my undies! Being so hot, it was pretty sticky down there! After a few cocktails, I pulled out the box and proposed. Luckily she said yes. I think the secret to our relationship is listening to each other and giving each other space. I go off surfing and Beth likes to spend time with her mates and going shopping. We also have a lot of fun and do not take things too seriously. BETH: I am from Manchester and after doing a masters degree in theology at the niversity of Aberdeen, I was not sure what I wanted to do. I walked into a travel agent and flicked through brochures on both New Zealand and Australia. New Zealand looked more like me so I booked a ticket and flew here in 2015. I had a long-term boyfriend in the who did not want to travel so we did the long distance thing for a few months but it did not work. I had been single for five months when I met Reid and was enjoying the single girl life, making friends and having fun. I moved into a flat in Wellington where the rule was that everyone had to go on a inder date. I wanted to be friends with my flatmates so I agreed. I had seen Reid’s profile pop up a few times and it turned out my flatmates knew him. I organised to meet him at a bar on ourtenay lace one Friday night. When I got to the bar, I saw Reid – he was with his workmates and still had his work clothes and boots on. I thought, do I really want to do this Before I could leave, his friend saw me and called me over. Reid was a bit drunk so his friend bought me bubbles, so I could catch up, and water for Reid so he could sober up. We got on so well it turned into a three-day date! n the Sunday night Reid was flying to Fiji to sail his uncle’s boat back to New Zealand. He was supposed to be gone for a few weeks but cut it short as he did not want me dating anyone else. He came straight from the airport to my house and said he had never been so sure of a woman before. I do not have a type, but go for personality over looks. he fact that Reid was handsome was a bonus. What attracted me was his free spirit and his kindness. Reid also is not into playing games but made his feelings clear from the start. We moved in together uite uickly and came to visit arureka state to book in our wedding. It was for sale and Reid’s father helped us buy it. Last year was the hardest of our lives – Reid’s father died, we had rla and then elta hit. It has also been challenging working and living together, but we both want the same things out of life. We are not materialistic at all and would rather go camping than stay in a fivestar hotel. o bring some happiness into the year we eloped in early ecember, getting married in a Martinborough vineyard.